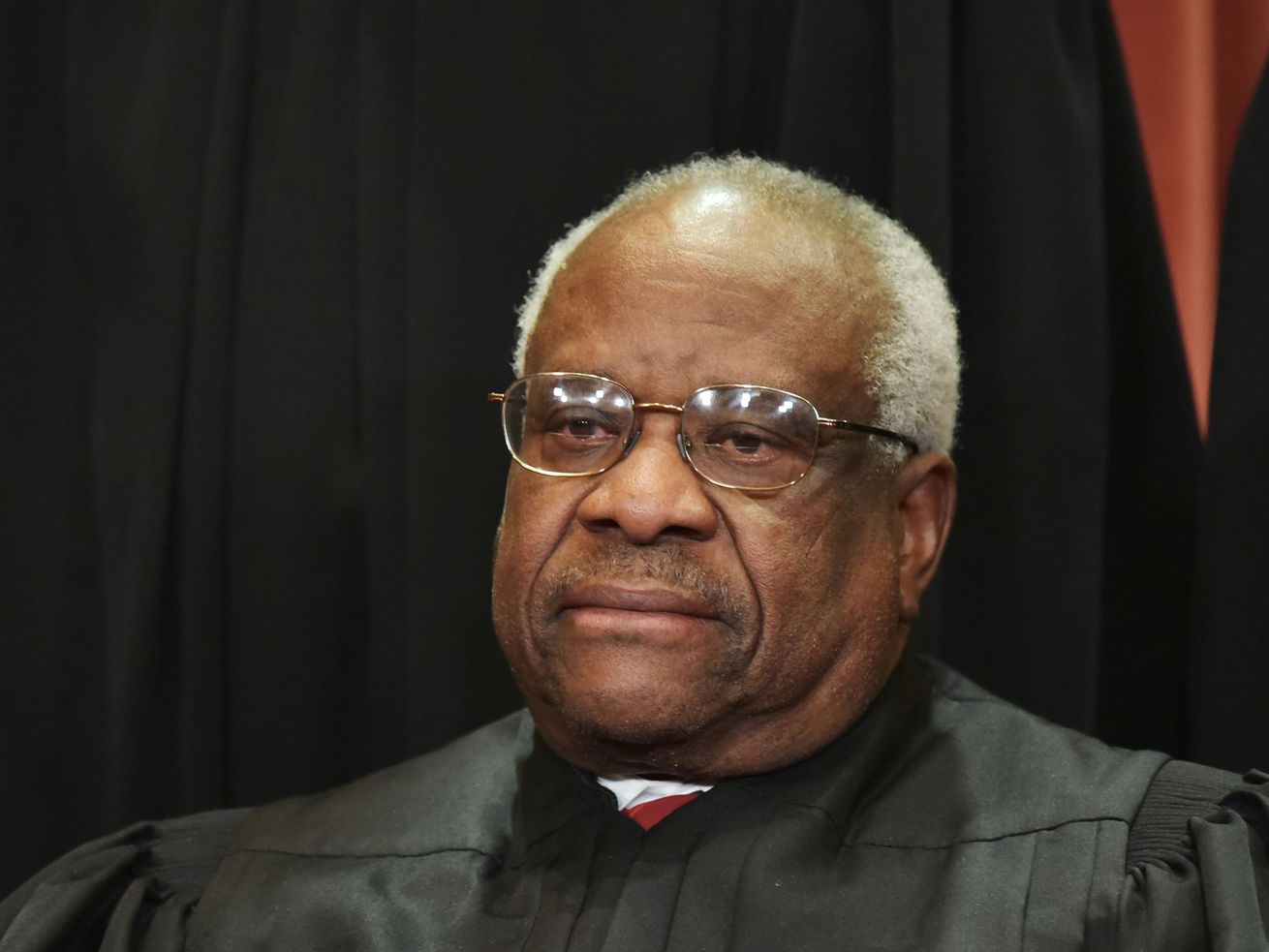 Associate Justice Clarence Thomas poses for the official group photo at the US Supreme Court in Washington, DC, on November 30, 2018. | Mandel Ngan/AFP via Getty Images

The Court’s sympathy for religious conservatives is in tension with its desire to shrink the administrative state.

Both cases heard by the Supreme Court on Wednesday involve a longstanding battle over employers with religious objections to birth control. Federal rules require employer-provided health plans to cover contraceptive care, but the Trump administration created a sweeping exemption allowing any nonprofit employer, and any for-profit employer that is not publicly traded, to ignore the requirement to provide birth control coverage if it expresses a religious or moral objection.

As Justice Sonia Sotomayor noted during Wednesday’s argument, depending on how the Supreme Court rules, between 75,000 and 125,000 women could either gain or lose contraceptive coverage.

The oral argument, which was conducted by phone due to the coronavirus pandemic, provided little clarity as to how the two Pennsylvania cases are likely to be decided. Every member of the Supreme Court’s Republican majority has, in the past, expressed sympathy for religious objectors seeking exemptions from a generally applicable law. But each has also expressed a desire to limit federal agencies’ discretion to make policy. And on Wednesday, several of those conservative justices appeared to realize that these two goals are in tension — at least in the two Pennsylvania cases.

The Pennsylvania cases are unlike previous Supreme Court cases involving religious objections to birth control. The two prior cases, Burwell v. Hobby Lobby (2014) and Zubik v. Burwell (2016), both involved religious employers who claimed they should be exempted from federal rules intended to ensure that working individuals have birth control coverage. The Pennsylvania cases, by contrast, involve a somewhat different question. They primarily ask whether the Trump administration has the power to give religious objectors a sweeping exemption, regardless of whether such an exemption is required by law.

At least three of the Court’s Republicans, Justices Clarence Thomas, Neil Gorsuch, and Brett Kavanaugh, expressed concerns that the Trump administration may not have this power — although Kavanaugh seemed to back off those concerns near the end of the argument. (While Thomas historically has been reluctant to speak during in-person oral arguments, he’s proved much more loquacious since the Court switched to telephone arguments.)

On the eve of Wednesday’s argument, it appeared likely that the Court’s Republican majority would bless a broad religious exemption to the birth control requirement, and this outcome remains fairly likely. But Thomas and Gorsuch, at least, sometimes appeared torn between two conflicting conservative values.

This suggests the possibility of a cross-partisan coalition to strike down the broad exemption for religious employers, with some of the Court’s Republicans resting on the ground that the administration exceeded its lawful authority by creating it — although such a decision would not prevent the Court from holding, at a later date, that all religious employers are entitled to broad exemptions from the contraceptive coverage requirement. But it could delay that decision for at least another year.

The Affordable Care Act requires health insurers to provide certain “preventive care and screenings” for women with no copays or cost-sharing. The Health Resources and Services Administration, a federal agency with the task of defining “preventive care,” determined that included birth control.

This determination sparked years of litigation from employers who object to some or all forms of birth control on religious grounds, and who claimed that they should be allowed to offer health plans that do not cover contraception. Yet while these employers won an incremental victory in the Hobby Lobby case, the question of whether federal religious liberty law permits employers to effectively cut off their employees’ access to birth control coverage remains unresolved.

One reason this legal question remains unresolved is that, shortly after President Trump took office, HRSA handed down a broad rule giving religious employers the sweeping exemption it hoped to win in court. So, rather than arguing for a freestanding right to defy the birth control coverage mandate, religious employers now hope to defend the Trump administration’s rule.

Meanwhile, two states, Pennsylvania and New Jersey, sued the Trump administration claiming that HRSA does not have the legal authority to give employers such a broad exemption. That suit is now before the Supreme Court.

The Trump administration, for its part, points to two federal laws that, it claims, permits HRSA to issue such a broad exemption. One is the federal Religious Freedom Restoration Act, the primary federal statute governing religious liberty claims. They argue that the act “required” the administration to implement a broad exemption.

Much of Wednesday’s argument, however, focused on the Trump administration’s claim that HRSA’s power to implement “comprehensive guidelines” governing certain forms of women’s preventive care also includes the power to exempt certain employers from those guidelines.

For at least the past eight decades, Congress has enjoyed a broad power to delegate policymaking to federal agencies. This is why, for example, the Affordable Care Act permits HRSA to decide which types of women’s preventive care must be covered by insurers.

Beginning in the Obama years, however, legal conservatives grew increasingly frustrated with the Obama administration’s ability to make new policy through existing laws delegating power to the executive branch. And this belief that the executive branch’s power to set domestic policy should be shrunk appears to have survived Trump’s election. Accordingly, all five of the Supreme Court’s Republicans have expressed a desire to shrink Congress’s power to delegate authority to executive agencies.

In a 2019 opinion, for example, Gorsuch proposed revising the largely defunct “nondelegation doctrine,” a constitutional doctrine briefly used in the 1930s to restrict Congress’s power to delegate authority to the Roosevelt administration. While Gorsuch’s opinion in that 2019 case, Gundy v. United States, is vague, it suggests that Congress must draft laws very precisely if it wants to delegate power to a federal agency.

Under Gorsuch’s approach, a federal law permitting agencies to regulate must be “‘sufficiently definite and precise to enable Congress, the courts, and the public to ascertain’ whether Congress’s guidance has been followed.”

Several conservative justices appeared concerned that neither RFRA nor the Affordable Care Act provide enough guidance to the federal agency to permit it to create religious exemptions. Thomas asked what, if any, standards guide the agency’s discretion. He also asked Solicitor General Noel Francisco “at what point do you run into a nondelegation problem?”

Similarly, Gorsuch worried that the Affordable Care Act’s language seemed to authorize “as expansive a delegation” of regulatory authority “as one might imagine.”

Kavanaugh also asked Paul Clement, one of two lawyers defending the Trump administration’s rule, whether he could identify any limits on the government’s discretion, though he later appeared to back away from this concern.

The statutory language delegating power to HRSA “seems to be broad language,” Kavanaugh said toward the end of the oral argument. And broad language suggests that a new administration will have broad discretion to set new rules.

All of which is a long way of saying that the outcome in the Pennsylvania cases is unclear. There is no reason to believe that the Court’s Republican majority will not, eventually, determine that religious objectors should enjoy broad exemptions. But Thomas and Gorsuch, at the very least, appeared conflicted between their sympathy for religious conservatives and their desire to revive the nondelegation doctrine.

And their votes, when combined with some or all of the Court’s liberals, may be enough to hand religious objectors a narrow defeat in these cases.