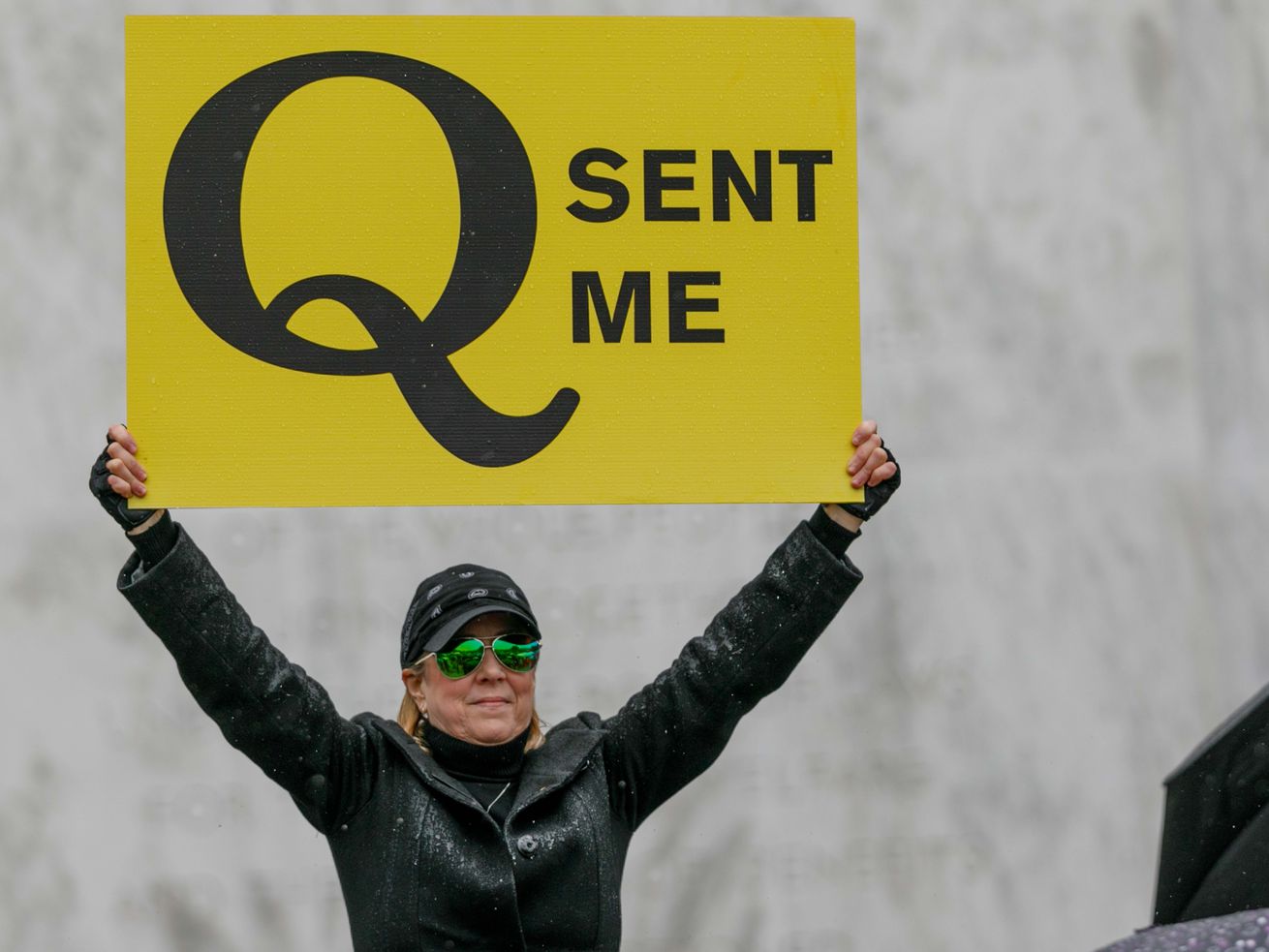 QAnon conspiracy theorists hold signs during the protest at the state capitol in Salem, Oregon, on May 2, 2020. | John Rudoff/Anadolu Agency via Getty Images

Jo Rae Perkins will be one of at least six GOP candidates for federal office on the ballot November 3.

Perkins won a four-way race for the party’s Senate nomination, earning just short of 50 percent of the vote. Former naval officer Paul Romero finished second with 30 percent. Perkins will face off with incumbent Democratic Sen. Jeff Merkley in the general election on November 3, which Merkley is expected to win.

Nevertheless, her victory — which came by a significant margin — is emblematic of the conspiracy theory’s influence among conservative voters, as is the way Perkins highlighted it in her victory speech.

In the speech, Perkins pointedly repeats the group’s most used catchphrase before thanking fellow supporters. “Where we go one, we go all,” she said. “I stand with President Trump, I stand with Q and the team. Thank you, Anons, and thank you, patriots. Together, we can save our republic.”

At its heart, QAnon supporters believe that a secretive network of government officials, Democratic politicians, and liberal elites are running an international pedophile ring and conspiring to bring down the president because he’s close to bringing them to justice.

QAnon is a conspiracy theory based around an anonymous online poster known as “Q” — a pseudonym that comes from the Q-level security clearance, the Department of Energy equivalent of “Top Secret.” Beginning on October 28, 2017, Q began posting on the 4chan message board /pol/ about Hillary Clinton’s imminent arrest. Followers of Q became known as QAnon, and they began awaiting “The Storm,” during which all of Trump’s enemies, including Rep. Adam Schiff and others, would be arrested and executed for being murderous child-eating pedophiles.

President Trump has not publicly embraced the conspiracy theory, but he hasn’t been shy about retweeting its supporters. And other conservative politicians like Rep. Paul Gosar (R-AZ) have occasionally winked at the group through dog-whistle statements (Gosar later said he unwittingly retweeted the QAnon message, though he never deleted the tweet). Support for “Q” has become a staple in crowds at Trump rallies around the US over the past few years.

It’s clear that the conspiracy theory has taken root within strains of the conservative movement, so Q-supporting candidates like Perkins shouldn’t come as a surprise — especially in blue states like Oregon, where GOP organizers tend to view winning a statewide election as an uphill battle and invest less, allowing candidates with fringe views to emerge as nominees.

Perkins made her support for QAnon part of her campaign, saying in a January video that there is a “very strong probability/possibility that Q is a real group of people, military intelligence, working with President Trump.” In a New Year’s Day tweet, she also tweeted about Q. In fact, the conspiracy theory has been a regular topic in the candidate’s social media postings.

In being anointed the GOP nominee to take on incumbent Sen. Merkley, Perkins became the first known Senate candidate to openly support the conspiracy theory. But she has stressed she believes there are many more candidates who believe in QAnon than are willing to admit to it.

One of those candidates, Jo Rae Perkins, has said that she believes that “there’s a lot more people that are running for political office that follow Q than are admitting to it.” pic.twitter.com/1BYfyypgOb

While it is difficult to say whether Perkins is correct on this point, there is a growing list of conservative candidates for federal office in 2020 who actively support the theory. According to Media Matters, there are at least five other QAnon-supporting congressional candidates on the federal ballot this fall, including four in California and another in Ohio. And US House candidate Samuel Williams is in a runoff election to settle a Texas primary later this summer.

It’s unclear how likely it is we’ll see an open supporter of Q elected to Congress this fall, but the mere presence of multiple candidates for federal office who support the theory suggests what has essentially been a fringe movement may be gaining a stronger foothold in the Republican party.

At its core, Q is about supporting Trump’s power over the federal government. And it allows its adherents to create order out of a chaotic administration that has been plagued with scandal. Under this conspiracy theory, instead of Trump being incompetent, he becomes beleaguered in his fight against evil, monstrous people. It’s a mass self-soothing exercise.

As Coaston explained, conspiracy theories tend to be self-sealing, meaning that they cannot be battled with facts because they are not based on facts to begin with. Trying to reason with a Q supporter using facts tends to end with the supporter only withdrawing deeper into the supposed conspiracy — and Trump’s governing style continually provides new ways to do this.

For instance, Trump has of late embarked on a series of attacks on government oversight and operational norms. Wednesday morning, he threatened to withhold funding to Democratic-controlled battleground states attempting to facilitate vote-by-mail in the midst of the coronavirus pandemic. And over recent weeks, Trump has purged inspectors general he perceives as disloyal, many of whom were simply doing their jobs by investigating the administration’s actions.

To many outside observers, such actions look like authoritarian power grabs. But to Q supporters, these actions are emblematic of the ways the president is fighting the “deep state.” Essentially, everything Trump does easily fits into this conspiracy theory, meaning there’s no need for its adherents to question his actions.

This means that, in many ways, belief in QAnon is the ultimate show of loyalty, something Trump has made clear he values greatly. The president has never been afraid to use the bully pulpit — and Twitter — to call out those whom he perceived to be disloyal Republican lawmakers. Utah Sen. Mitt Romney, North Carolina Sen. Richard Burr, and even occasional close confidant Rep. Matt Gaetz (R-FL) have found themselves on the receiving end of Trump’s wrath.

In highlighting their support for QAnon, then, candidates like Perkins are signaling to the president that he does not need to worry about them raising his ire as Romney so often does. Instead, he can trust them to be allies and to support his governing style, even if it includes brazen power grabs.

But candidates don’t just win through osmosis or because they are loyal to Trump. It’s important to keep in mind that the candidates espousing these beliefs are appealing to a big enough cross section of Republican voters in Oregon and in districts in California and Ohio that they’re starting to win party primaries.

That such candidates are finding even a little success within the Republican election apparatus should be a worrying sign to party officials about the health and direction of the party going forward — particularly as it tries to deal with Covid-19 and advance more mainstream priorities like appointing conservative judges.