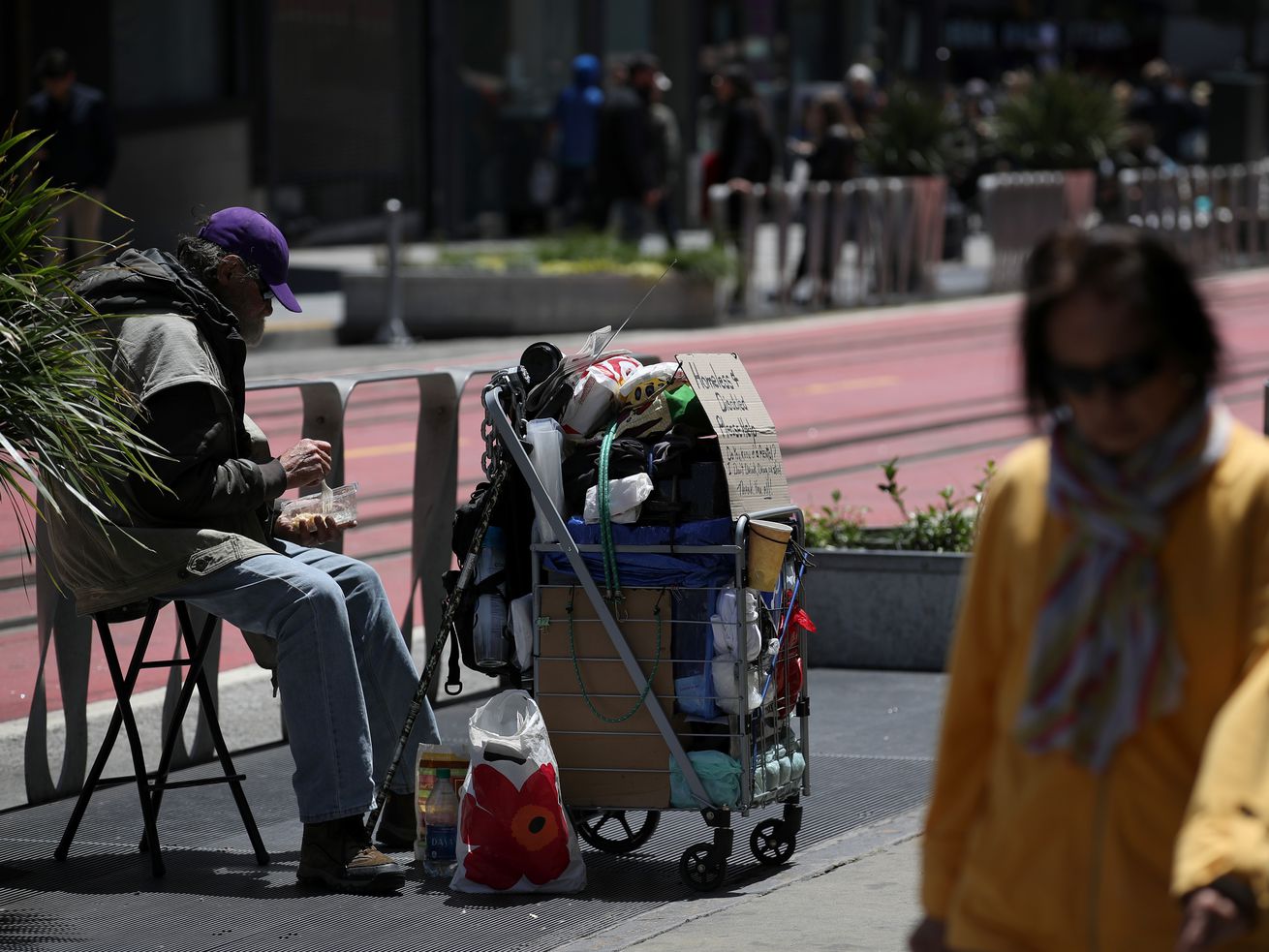 Income inequality is inescapable on the streets of San Francisco. | Justin Sullivan/Getty Images

“The CEO tax targets just what people want to be targeting.”

That’s the question behind an intriguing and politically timely new proposal that San Francisco lawmakers plan to put before voters next spring and that could lead to similar efforts across the country: A second-of-its-kind attempt to tax the companies that are paying their CEOs too much and their workers too little.

The proposal bridges many of the big ideas coursing through the progressive bloodstream during the presidential campaign: An agita with a technology industry that careens from scandal to scandal; a disgust with the yawning economic inequality between the wealthiest and the rest of us; and a shame over a lack of resources for people struggling with mental illness, which contributes to San Francisco’s homelessness crisis.

The tax would try to raise about $100 million for mental health services in San Francisco, money that proponents think would get people off the streets. And if it passes, progressive leaders think it could prompt a national movement to similarly try to solve social ills with a targeted tax on the companies that are most seriously driving income inequality across the country.

“Their stocks are shooting through the roof. At the same time, inequality is going right up along with it,” said Matt Haney, the supervisor behind the proposal. “People tend to watch what San Francisco is doing.”

But here’s the catch. In San Francisco — the city that’s most synonymous with Big Tech — it is not tech companies, but traditional retail, that would be most impacted by this tax. And in that way, the proposal shows how the backlash to tech has spawned a broader anti-business movement in a place where tech is the dominant, but not universal, industry.

“People are able to see, for certain tech companies, the incredible amount of wealth they’ve been able to bring into their companies and to their CEOs, but not necessarily to the communities that surround these companies,” said Sam Lew, who ran the campaign last year in favor of Proposition C, which also taxed tech companies, and is backing this proposal. “The CEO tax targets just what people want to be targeting.”

The measure, slated to appear on the ballot in San Francisco in March, would increase the gross receipts tax against companies that pay their CEO more than 100 times what they pay their median worker in San Francisco. It’s a fairly modest levy, but would increase on an escalating scale depending on the pay ratio, with the highest tax assessed against those companies that pay their CEOs more than 600 times what the typical employee makes.

If adopted, the proposal would be far-reaching. It is meant to apply to any company — public or private — with any San Francisco employees, not just those headquartered here. That means it would require at least some self-reporting from companies about how much their employees “make” in total, which critics of the tax say would prove unreliable.

The Chamber of Commerce, which opposes the tax, argues that companies will try to manipulate this ratio by moving their lower-paid workers outside of the city. While that might work — because the proposal merely considers how much the median employee in San Francisco makes — the Chamber admits it has no proof that tech companies are actually talking about this yet.

Jay Cheng, the Chamber’s policy director, went as far as to say that this exodus of lower-paid workers would trigger “backfire gentrification.”

“This is trying to find an easy, snappy, buzzy solution to a very difficult problem. And beating up on big companies is a fun way to do it,” he said.

Even if the ratio is not artificially manipulated, conservatives critique that these ratios can sensationalize the skills gap between a well-paid CEO and lower-level employees. To Mark Perry, an economist at the University of Michigan who has studied CEO pay ratios, that’s strange because “the average person has no problem that LeBron James makes whatever it is.”

“So often the average person or the average politician doesn’t even understand what the CEO of a corporation or a company like Facebook or Google does,” Perry said. “Just like it’s a very small group of people who could succeed in the NBA.”

This would hardly be the first proposal to vilify rich CEOs. Multiple Democratic presidential candidates, like Elizabeth Warren and Bernie Sanders, have run on limiting the extravagance of corporate pay packages. Seven states, including California earlier this year, have previously introduced bills to tie a company’s tax rate to its pay ratio.

And in Portland, Oregon, in 2017, city officials instituted a new CEO pay tax that its business community opposed bitterly but that raised $3.5 million for the city. That local measure brought national exposure to the idea, and San Francisco has explicitly called out Portland as its model.

Sarah Anderson, who studies income inequality and pay ratio data at the Institute for Policy Studies, predicted that if San Francisco’s measure passed, it would be at the vanguard of a bigger movement.

“There will be a really energized debate that will be very helpful — and will probably encourage a lot of other cities to follow suit,” she said.

Proponents of the San Francisco measure say they don’t actually know which or how many companies will be affected. While companies are, as of recently, required to publicly share their overall CEO-to-median-worker pay ratio with the SEC, there’s no public data that discloses that ratio for solely their San Francisco employees, which could be quite different from their national median.

But to get an idea of which companies could be subject to this tax, the data company Equilar said at least 10 public companies headquartered in San Francisco had pay ratios that eclipsed the 100:1 threshold. (We don’t know which private startups would qualify.)

The CEO of the Gap, which is headquartered in San Francisco, makes 3,566 times what the retailer’s median worker pulls in. The CEO of another retailer, Williams-Sonoma, earns 2,447 times the typical employee. Other San Francisco-based companies with pay ratio gaps in excess of 100:1 include Levi Strauss, Wells Fargo, Prologis, Salesforce, Charles Schwab, Visa, Glu Mobile, and Yelp.

As you can see from Equilar’s survey, the companies that would take the brunt of the proposal appear to be retail — not tech. And that speaks to the broader trend that both proponents and critics contend: If you’re trying to limit the corporate power of Big Tech, you’re swinging at the wrong target with this bill.

That might explain why tech has been slow to awaken to this threat. Neither Stripe nor Square, two San Francisco-based companies that have been among the active in recent years in local political taxation fights, are working on this issue, according to people familiar with their thinking. Even Marc Benioff, the garrulous Salesforce CEO who is a leading advocate for increasing the city’s social safety net, declined to comment on the CEO tax through a spokesperson.

Haney recalled reaching out to executives from Uber, Airbnb, Lyft, Dropbox, and Twitter for a lunch in early June, right after he introduced it.

“We expected some opposition, but we weren’t overwhelmed by opposition once it came out,” Haney said. “I think a lot of the tech companies — and not just tech, but larger companies — many of them are here to stay in San Francisco. They want to have a positive relationship with the city.”

Haney claimed that private polling he had commissioned showed that he had support from around 75 percent of San Francisco voters for this proposal. The measure requires two-thirds support to pass in March.

The supervisor has tried to message this as a pro-business measure, even though no one wants to pay more in taxes, no matter how modestly.

“When I meet with the companies, they say, ‘What are you doing to keep our streets clean and get people help?” he said. “We believe that companies that are doing well in San Francisco — well enough to pay their CEOs upwards of tens of millions of dollars — can pay a small amount to help us address our most urgent crisis.”

Haney’s hope is to get people that help by using the $100 million to shorten San Francisco’s at times months-long wait list for beds for the unhoused mentally ill.

Christin Evans, who runs a bookstore in the Haight-Ashbury neighborhood and is a prominent advocate for the homeless, said San Francisco simply needs more money for more beds.

She emotionally recalled a local homeless woman who she frequently sees wandering half-clothed or publicly urinating near her bookstore on Haight Street. To Evans, she speaks to the need for more mental health care.

“You look at someone like her and say, ‘If we’re a civilized society, how could we allow someone who is clearly not able to take care of themselves live in such circumstances’?” Evans said. “She’s a perfect example of somebody who any normal person would assess and judge that she is clearly needing additional resources and supportive housing and assistance, but because of the lack of resources she is someone who is on a wait list.”

Or as Lew, now the policy director for the Coalition for the Homeless put it: “This is the measure that would save lives.”