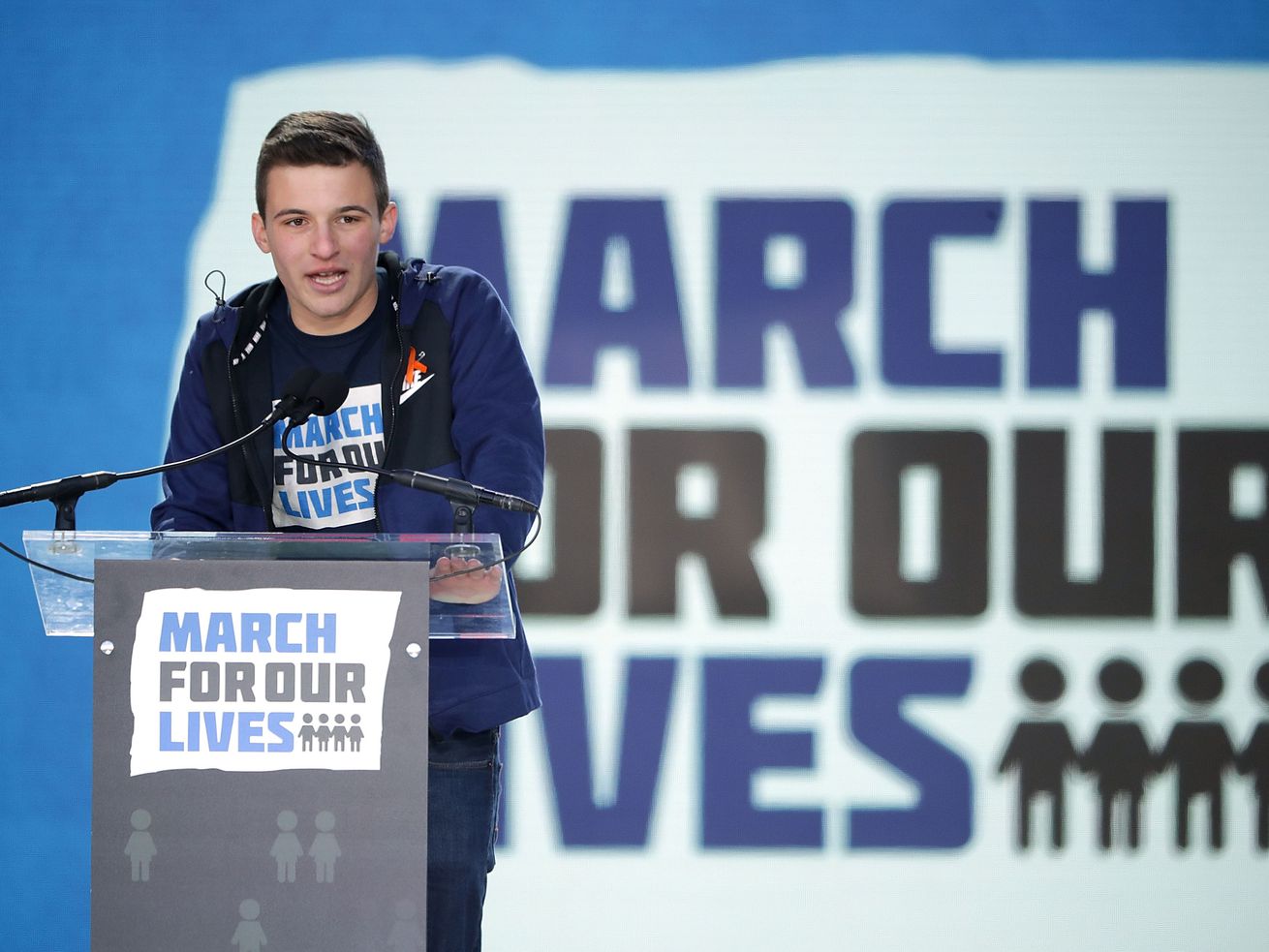 Cameron Kasky and Shay “Young Kiv” Kivlen put together a livestream Madden event to raise money for the Jacksonville victims and their families.

A Parkland shooting survivor and activist is teaming up with a professional gamer and friend of one of the victims of last weekend’s shooting at a video game tournament in Jacksonville, Florida to raise money for the victims of the incident and their families.

Cameron Kasky, 17, is one of the students who emerged as a leader denouncing gun violence after the Parkland shooting and helped to organize the March for Our Lives. Shay “Young Kiv” Kivlen, 21, is a professional gamer and one of the top players of the Madden NFL video game in the world. He was at the Jacksonville tournament that was targeted by a mass shooter last weekend and left just minutes before the gunman opened fire. One of the victims, 22-year-old Elijah “TrueBoy” Clayton, was his friend.

“It hurts, it sucks, and I can only imagine being their families, I can only imagine going through that,” Kivlen told me in a phone interview on Sunday. “It’s just awful, and I’m trying to do anything I can to help support them.”

After the shooting, Kasky got in contact with Kivlen regarding a response to the incident, and they developed a plan.

They decided to set up a fundraiser on Monday, September 3, for a live-stream event to raise money for the victims and their families. Kivlen and Tampa Bay Buccaneers wide receiver Mike Evans will stream themselves playing Madden on Tiltify, the online fundraising arm of streaming platform Twitch.

Thank you to @cameron_kasky @WeAreTiltify and everyone else I have been working with to help the families of Elijah and Taylor. You guys have been amazing and the Madden Community appreciates you so much. ❤️ https://t.co/XIMqHKFan7

All the proceeds will go to the Jacksonville Fallen Gamers Fund, which was put together to help the families of Clayton and Taylor “SpotMeplzzz” Robertson, 27, who was also killed last Sunday. Clayton was from Woodland Hills, California, and Robertson was from Giles, West Virginia. Money will go to 10 other individuals injured during the incident as well.

“I was quickly able to mobilize and say, ‘Let’s get together and do something right here,’” Kasky told me.

The livestream will start at 2:30 pm Eastern Time on Monday, September 3. Tiltify is taking donations now through September 30.

I’m honored to participate in this fundraiser and show my support to the families of the victims in Jacksonville.

EA is also making a $1 million donation to the victims and has launched a GoFundMe campaign for contributions.

Kivlen, who lives in Seattle, told me he met Clayton a few years ago when he first got into Madden after hurting his arm playing baseball and deciding to lean into the video game full-time. They played against each other often and wound up in a “party chat” (a big group chat) together and started talking every day. They met at tournaments and would spend time outside of them. “We were really close,” Kivlen said.

He was at the Madden tournament at Jacksonville Landing last weekend before the shooting occurred but lost before the gunman opened fire, so he decided to go back to his hotel room to nap before finals. He said he was watching the tournament stream online when he heard the shots. (An extremely disturbing video captured during the incident shows Clayton playing on the stream just before the shooting starts.)

At first, Kivlen thought there was perhaps a robbery. But he then realized something much more dire might have happened. He said he started calling his friends at the tournament until one answered, saying he was stuck in a bathroom at the venue with 30 other players and that their friend, Elijah, was dead.

“You never think there’s a shooting happening at the tournament,” he said.

Kivlen also said that he heard through a representative of EA, the software publisher behind the Madden game series and sponsor of the tournament, that the shooter allegedly asked someone where he was going when he left. They thought he might have been a target.

Kivlen said he met Clayton’s parents in Jacksonville and has been in contact with his cousin, who’s setting up his memorial service. Both Kasky and Kivlen will attend the service in Woodland Hills, California on Wednesday.

With great sorrow, I post the below details for Elijah’s service being held on September 5th in the Los Angeles area. I will be there to pay my respects with @young_kiv and encourage anyone who can make it to please attend.

Kasky was a junior at Marjory Stoneman Douglas High School in Parkland, Florida in February when a gunman opened fire, killing 17 people. Since then, he and other students have emerged as vocal leaders, speaking out against gun violence, organizing the March for Our Lives in March and encouraging young people to vote.

Kasky soon after the shooting in February at a town hall event hosted by CNN pushed Sen. Marco Rubio (R-FL) on his donations from the National Rifle Association in a moment that went viral.

I asked Kasky on Sunday what it was like to feel compelled to get involved in another gun-related tragedy in his home state. He said it doesn’t matter.

“The shooting could have happened 100 hours away, the point is that they continue to happen. As long as they happen, there’s always something to be done and make sure that the people who are affected are taken good care of,” he said. “Nobody should have to worry about money when they’re burying their children, especially not their children who were shot while playing a video game.”