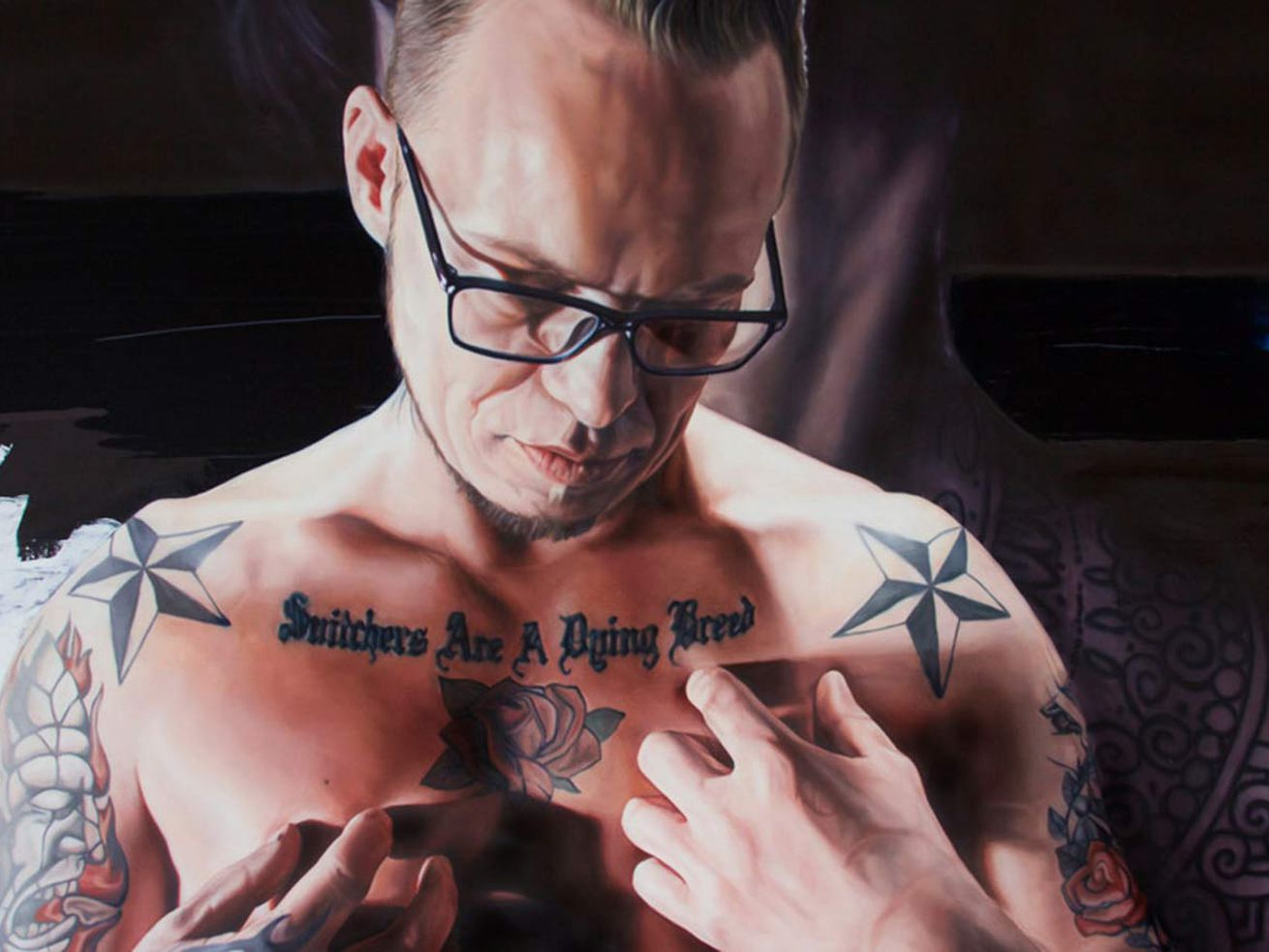 A painting by Barbora Kysilkova of Karl-Bertil Nordland, as seen in The Painter and the Thief. | Courtesy of Neon

The Painter and the Thief tells their poignant true story through two sets of eyes.

Much thievery is committed with the aim of enriching somebody’s personal coffers, usually the thief’s. And that’s true of some art theft as well; paintings or sculptures are stolen so they can be sold on the black market, or used as a bargaining chip.

But sometimes art disappears for reasons that are difficult to understand. On April 20, 2015, thieves made off with two paintings by the young Czech painter Barbora Kysilkova, who was exhibiting at Galleri Nobel in Oslo, Norway. Kysilkova is a talented painter, mostly of people in emotionally charged moments, but she wasn’t particularly well-known at the time. And the way the paintings were stolen was odd: Rather than simply cutting the canvases from their frames, the two thieves removed each staple, in a way that seemed to indicate, as news broadcasts noted, that one or both of them were professionals.

Kysilkova, who had moved to Oslo to be with her partner, was disheartened by the theft, especially because one of the paintings was personally significant to her. But she was also interested in why anyone would steal those two paintings, and she wanted to meet the thieves.

She tracked down one of them, Karl-Bertil Nordland, an intelligent and tattooed Norwegian who was so high at the time, he told her, that he couldn’t remember why he did it — or what he did with the paintings. Kysilkova, both extraordinarily empathetic and headstrong, found her interest turning from the stolen paintings to the stealer, and asked Nordland if she could paint his portrait. When he saw it, he exploded into tears. And their friendship and creative partnership began to grow.

It sounds like the setup for a finely realized fictional drama, but it’s the true story that unfolds in The Painter and the Thief, a documentary that feels like an elegant fairy tale. Directed by Benjamin Ree, the film follows Kysilkova and Nordland for several years as they meet, begin to work together, and develop a relationship both as painter and muse and as friends.

Nordland is a petty criminal who’s addicted to drugs when he meets Kysilkova. But his life wasn’t always that way, he tells us; he was an elite BMX biker and a talented carpenter at one time in his life. Kysilkova finds him fascinating as a muse, but is frustrated with his habit of disappearing for days and his refusal to get help for his addiction — a refusal that eventually drives away his girlfriend as well. After a horrible car accident, he lands in the hospital and then in prison. Meanwhile, Kysilkova struggles to earn enough money to pay rent on her studio and quibbles with her partner, who questions how healthy her interest in Nordland can be.

Ree follows quietly, invisible enough to his subjects that they frequently let their guards down. We hear what Kysilkova and Nordland are thinking not just about themselves but about one another; the story wraps back on itself several times to give us a different perspective and to let us see what it is to be Barbora the painter or Bertil the thief.

And that is what makes The Painter and the Thief so enormously intimate and gripping: Through two different sets of eyes, we are asked to learn how to see. A painter like Kysilkova trains themselves to notice and see the world in a different way from most people. Several times during the film, Nordland says that he marvels at how she sees him. But he sees her too — more keenly than she might imagine — and starts to understand what motivates her, what hurts her, and why she paints the world.

The Painter and the Thief won a prize at Sundance for creative storytelling, and no wonder: It actively challenges what we think we understand about its characters based on their appearance, class markers, or behavior. It highlights the way artists of all kinds, from painters to filmmakers, transform reality into something that’s at least a little fictionalized in order to make their work — and how everyone conceals the truth a little.

It also trains the audience, just a bit, on how to become people who see. Whether it’s the way Ree’s camera moves across a painting or the perspective from which he frames and shoots Kysilkova’s and Nordland’s relationship, The Painter and the Thief coaxes its viewers to stop and pay attention to the world in order to learn to love it. By the time the breathtaking final moment arrives, we have learned, a little better, how to really look at the world, as a lover of both beauty and the strange bits of ourselves that make us really human.

The Painter and the Thief opens on May 22 in virtual cinemas and digital platforms, including iTunes, Fandango Now, and Google Play. Some virtual screenings on opening weekend also involve Q&As with filmmakers and subjects (one moderated by me). See the film’s website for full details.