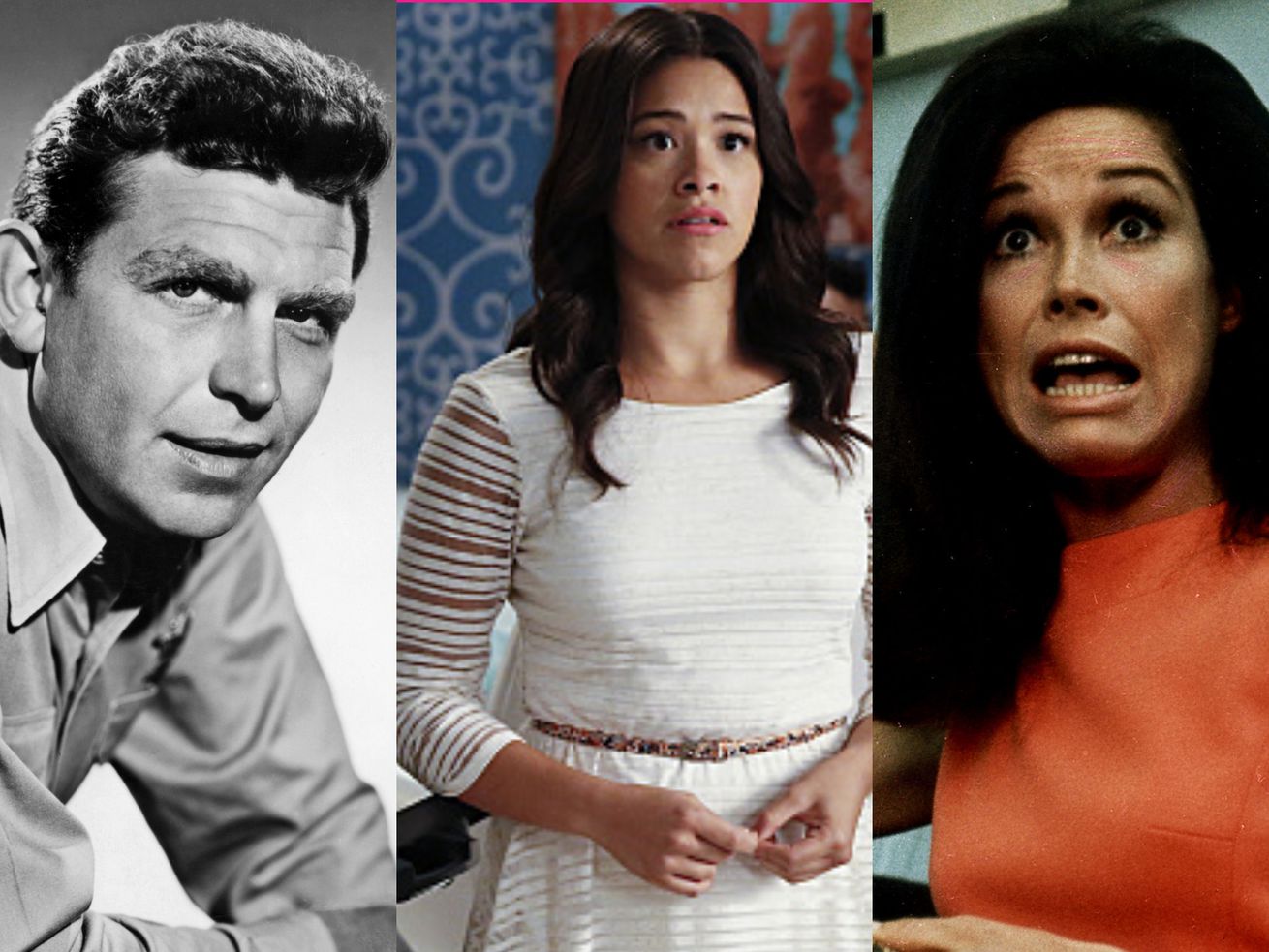 The Andy Griffith Show, Jane the Virgin, and The Mary Tyler Moore Show are all great comedies to watch — even while you’re distracted by other things. | Getty Images/The CW/Getty Images

Cheers, Jane the Virgin, and six other TV shows to watch while you’re otherwise distracted.

Below, I’ve listed eight classic TV comedies that are perfect viewing, whether you’re the poster child of concentration or watching while you’re otherwise distracted. If you look up for a couple seconds between levels of your favorite mobile game, as you’re making dinner, or while you’re playing a board game, you’ll surely catch a great joke or two. And if you actually sit there and focus, you’ll be treated to some of the best comedy the medium has to offer.

Here’s the loose criteria I used to compile this list: I wanted these shows to have at least 100 episodes — for maximum “zone out with your phone out” time — and I wanted all of them to be more reliant on verbal dexterity than visual humor for laughs. I nixed lightning-quick shows with lots of gags (bye to 30 Rock and Community, champions both), and I skewed away from super-recent shows you probably already know about (like The Office and Parks and Recreation) in favor of classics from throughout TV history.

These shows are all sure to delight, even when you’re texting with your friends about how bored you are.

With eight seasons and 249 episodes, The Andy Griffith Show originally ran from 1960 to 1968 — and it’s the ideal black-and-white sitcom for the social-distancing era. Set in the warm and whimsical burg of Mayberry, North Carolina, the series follows an affable small-town sheriff, his goofball deputy, and his endlessly sweet son. The Andy Griffith Show’s slower pace might make it a tricky marathon in other circumstances, but it’s excellent background viewing. And if you happen to see a few seconds of, say, “Opie the Birdman” (in which young Opie Taylor kills a mother bird and then must care for her chicks), you’ll be watching some of the best first-rate sitcom stuff ever produced. (In addition to streaming on Netflix, The Andy Griffith Show is available on the streaming service Tubi, which is free with ads.)

Cheers (streaming on Netflix and Hulu)

If you somehow haven’t seen all 11 seasons and 275(!) episodes of Cheers, which ran from 1982 to 1993, consider making it your next big project. Quite possibly the finest sitcom ever produced, the show’s strength is in its sparkling dialogue. At first, that dialogue was mostly concentrated between Cheers’ Hepburn-and-Tracy-style lovers — Sam Malone (Ted Danson) and Diane Chambers (Shelley Long). But it later came to encompass the entire crew at the bar Cheers, after Long left the show at the end of season five and it subsequently became more of an ensemble comedy. Cheers also launched the careers of a veritable who’s-who of sitcom talent, including a young Woody Harrelson and Kelsey Grammer — whose Cheers character later spun off into Frasier, another very good background show. (In addition to streaming on Netflix and Hulu, Cheers is available on Amazon and CBS All Access.)

After 14 seasons and 154 episodes (and counting), It’s Always Sunny in Philadelphia, which debuted in 2005, is the sitcom of scumbums everywhere. The hijinks of the folks at Paddy’s Pub in Philadelphia are at once a subversion of sitcom tropes that have existed since time immemorial and an increasingly bitter tale about Americans in love with their own misanthropy. But there’s also more touching pathos in later seasons than you might expect. (Indeed, the whole series is worth sticking with even through its off episodes, so that a very particular dance sequence in a later season hits as hard as it should.) It’s Always Sunny is another show set in a bar with a terrific ensemble cast that went on to do so many other great things — but in this case, that cast keeps coming back every year to make new episodes.

Jane the Virgin (streaming on Netflix)

Before you object, hear me out: Yes, Jane the Virgin is hyperserialized; yes, its candy-coated world is worth devoting attention to so as to absorb every frame; and yes, it’s an hour-long dramedy and not a half-hour sitcom like the rest of the shows on this list. But across five seasons and 100 episodes (which aired between 2014 and 2019), Jane tells a wildly involving, telenovela-inspired story about a young woman who is accidentally inseminated and becomes pregnant with the baby of a man she’s never met. The show comes up with even more unbelievable story ideas from there, but thanks to several smart storytelling devices (a narrator who keeps you up to date with everything, so many plot twists that you soon realize many of them don’t matter), Jane the Virgin will let you zone out, too, dialing in every so often to watch one of its many effortlessly heartfelt scenes.

King of the Hill (streaming on Hulu)

Most animated sitcoms are driven by visual gags as much as great dialogue — think of all those goofy signs in the background of The Simpsons and Bob’s Burgers. And King of the Hill has some of those gags spread throughout its 13 seasons and 259 episodes (which ran from 1997 to 2010). But its low-key tale about a Texas man with weirdo neighbors who just wants to raise his son right has big Andy Griffith Show vibes, with a (slightly) more modern sensibility. King of the Hill is also one of the few shows in TV history to get red-state America right, capturing both the reasons so many people love living there and the reasons so many can’t wait to leave. And it boasts a roster of top-notch characters beyond its central trio of Hank, Peggy, and Bobby Hill.

Malcolm in the Middle (streaming on Hulu)

Many of the shows on this list are about people in the working class, sitcoms that have both a high batting average and a tendency to engage in wacky shenanigans that nonetheless remain grounded in something real (a.k.a. the sitcom sweet spot). And few shows engage in wackier shenanigans or are better grounded in reality than Malcolm in the Middle, which ran for seven seasons and 151 episodes from 2000 to 2006. Malcolm (Frankie Muniz) is the narrator, and when the series begins, he’s been placed in a gifted school program that looks like it will be his ticket out of the blue-collar milieu in which his family exists. His parents (Bryan Cranston and Jane Kaczmarek) are constantly stretched thin, and Malcom’s three other brothers make his home a chaotic one. But for Malcolm, the future is only looking bright. And yet as the series runs, its affection for all of its characters grows, even as its disenchantment for Malcolm’s stabs at upward mobility grows in tandem. It’s an interesting, nervy series, and one of the best ever made about class in America.

The innovations pioneered by The Mary Tyler Moore Show (which ran for seven seasons and 168 episodes between 1970 and 1977) won’t seem particularly notable to modern audiences. For one thing, the idea that a show could be based on a single woman defined more by her job than any romantic connections was revolutionary in 1970, and … that’s at least somewhat less revolutionary in 2020. But watching Mary Richards (Moore) and her friends and co-workers look out for each other as they fumble through a tumultuous decade makes for one of the warmest and most inviting sitcoms ever made — and one of the few to remain good for every single one of the seven seasons it aired, with a series finale so great that it became the template for every sitcom finale going forward.

Mom, which has so far run for seven seasons and 152 episodes since it premiered in 2013, is an excellent show about breaking the often-intertwined cycles of poverty, trauma, and addiction. That sounds heavy, and it is — but Mom is also incredibly funny once it hits its stride (which, admittedly, takes a while; if you just want to skip the first season, you probably can). Anna Faris and Allison Janney play a daughter and mother whose contentious relationship is driven by the addiction issues they both struggle with, and as the series begins, they’re making a concerted effort to stay sober together. It takes a bit of time for Mom to figure out what works (the various other members of the pair’s addiction support group) and what doesn’t (Faris’s character’s restaurant job), but even at its worst, the show offers a look at an America rarely seen on TV anymore. (Mom is also available on CBS All Access.)