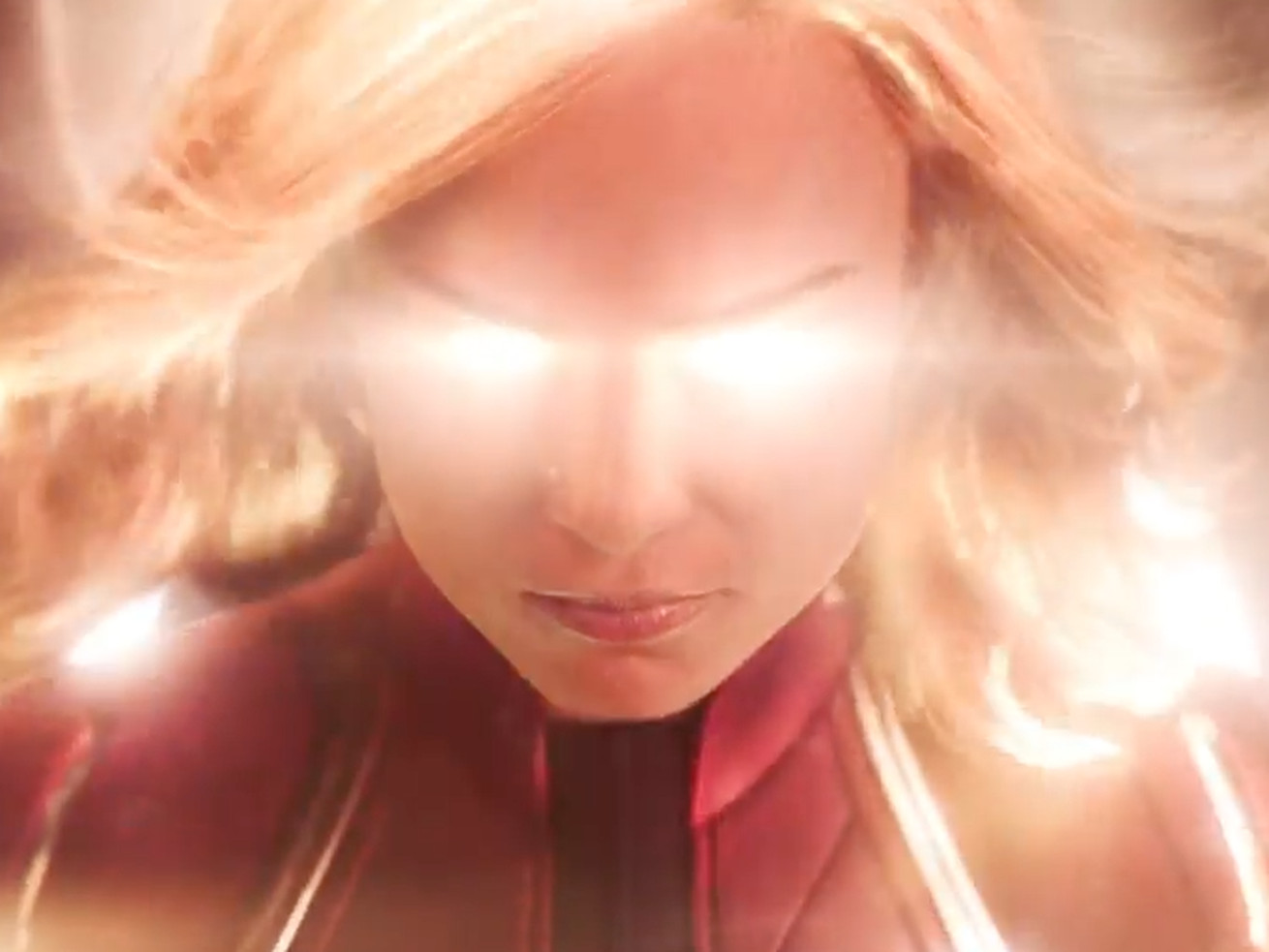 On Tuesday, Marvel took us higher, farther, and faster with the release of the first Captain Marvel trailer, which gave fans their first look at Brie Larson as Carol Danvers, a.k.a. Captain Marvel.

As the movie is set in the 1990s, the trailer also features some shots of Marvel institutions Nick Fury (Samuel L. Jackson) and Agent Coulson (Clark Gregg) after getting a dose of that wonderful CGI youth serum. There’s also a glimpse of Jude Law, whose character hasn’t been confirmed yet, and of Crazy Rich Asians star Gemma Chan’s Minn-Erva, a member of the elite alien military team known as Starforce.

The trailer bolsters what Marvel has said about the movie — that it’s a story about Carol and Earth caught in the middle of a galactic war between alien races called the Skrulls and the Kree — while adding more connective tissue. Carol, as Fury observes, is a renegade soldier, but she has amnesia and can’t recall who she is or what she’s supposed to be.

While we’ll have to wait until March 8, 2019, for the movie to fill in the blanks, the trailer dropped some major clues about Carol’s origin story and some comic book references to think about — some of which are either so brief or so sly that they’re easy to miss. Here, then, with the help of some slowed-down GIFs, are three things we learned from the Captain Marvel trailer.

One of the big moments in the trailer is Captain Marvel absolutely decking an old lady on a bus. It’s visually shocking to watch memaw’s gray hair whipping as Carol’s fist meets her face — and bluntly humorous, because sucker-punching septuagenarians isn’t how Marvel superheroes are supposed to act.

What’s being implied here, though, is that Carol sees something the rest of the population, including the audience, doesn’t: She knows that this old lady is actually a Skrull, part of an alien race with the power to shape-shift. They use this power to infiltrate and spy on their enemies, so it stands to reason that the lady Carol is punching is a Skrull. (Or, alternatively and less likely, that the person who looks like Carol is a Skrull who’s going around punching innocent old ladies.)

This tells us that Carol has a Skrull-detection ability, which seems to be important to Nick Fury.

Marvel hasn’t really explained (nor should we expect it to, because it would defeat the purpose of the movie) what motivates Skrulls other than they are villains of the film and they’re enemies of the Kree, another alien race that Carol happens to be allied with. But in an extremely brief scene in the trailer, it appears that a young Nick Fury and two other characters are present while a Skrull body is being examined:

Considering alien autopsy scenes are often used to convey the idea that the humans have no idea what they’re dealing with (see: Independence Day), it makes sense for Fury to track down Carol to explain the appearance of Skrulls on Earth, and perhaps inquire about an impending invasion.

In the comic books, Carol Danvers is granted powers like super strength and flight through a freak accident involving an exploding Kree device. Now, there’s no hard rule that movies must follow everything that happened in the comic books (nor is there a rule that comic books can’t change what happened in the past, an act colloquially referred to as a retcon). But there’s a scene in the trailer that might reference Carol’s superhero origin story:

Disclaimer: This could totally not be Carol Danvers, just someone with the same hair and physical stature, and could also have nothing to do with the voiceover during this scene, which directly refers to Carol.

But if this is in fact Carol, the thing to notice during this bright explosion is the uniform she’s wearing. It’s not the green metal suit she wears when she’s crashing down to Earth at the beginning of the trailer — it looks like a dark green Air Force jumpsuit. And if this explosion is happening while Carol is in her jumpsuit, it signals that she’s still human when this is occurring, and this could be the explosion that gave her her powers.

That in mind, it seems like the aftermath of that scene is this other moment from the trailer where Carol, in her jumpsuit, is knocked down. The setting (the dusty, rocky field and the trees) looks to be the same:

If this is indeed how Carol gets her powers, it seems like the movie will then fill us in on how an earthling with powers eventually made her way to marching with Starforce, the elite military unit of the Kree:

There may be another villain waiting in the wings

The most puzzling element of the trailer is who we see Carol going up against when she assumes her identity as Captain Marvel. In a new red-and-blue uniform that’s different from both her Starforce uni and her Air Force jumpsuit (see: the fingerless gloves), Carol seems to be preparing to fight a being in a black spacesuit. We don’t see his or her face, but it seems like this isn’t a part of Fury’s team, nor does the uniform seem to match the suits worn by the Skrulls we see in the trailer:

While the movie’s synopsis is pretty clear that Carol is stuck in the middle of a war between the Skrulls and the Kree, and though we’ve heard reports that Skrulls are the major villains in the film, it wouldn’t be surprising if there’s a twist and a secondary villain shows up to crash the party (think of the twists in Doctor Strange and Guardians of the Galaxy Vol. 2).

Unfortunately, we’ll probably have to wait until the movie is released in March 2019 to see whom Carol is going up against. Luckily, though, we have this amazing shot of Carol powering up to tide us over: