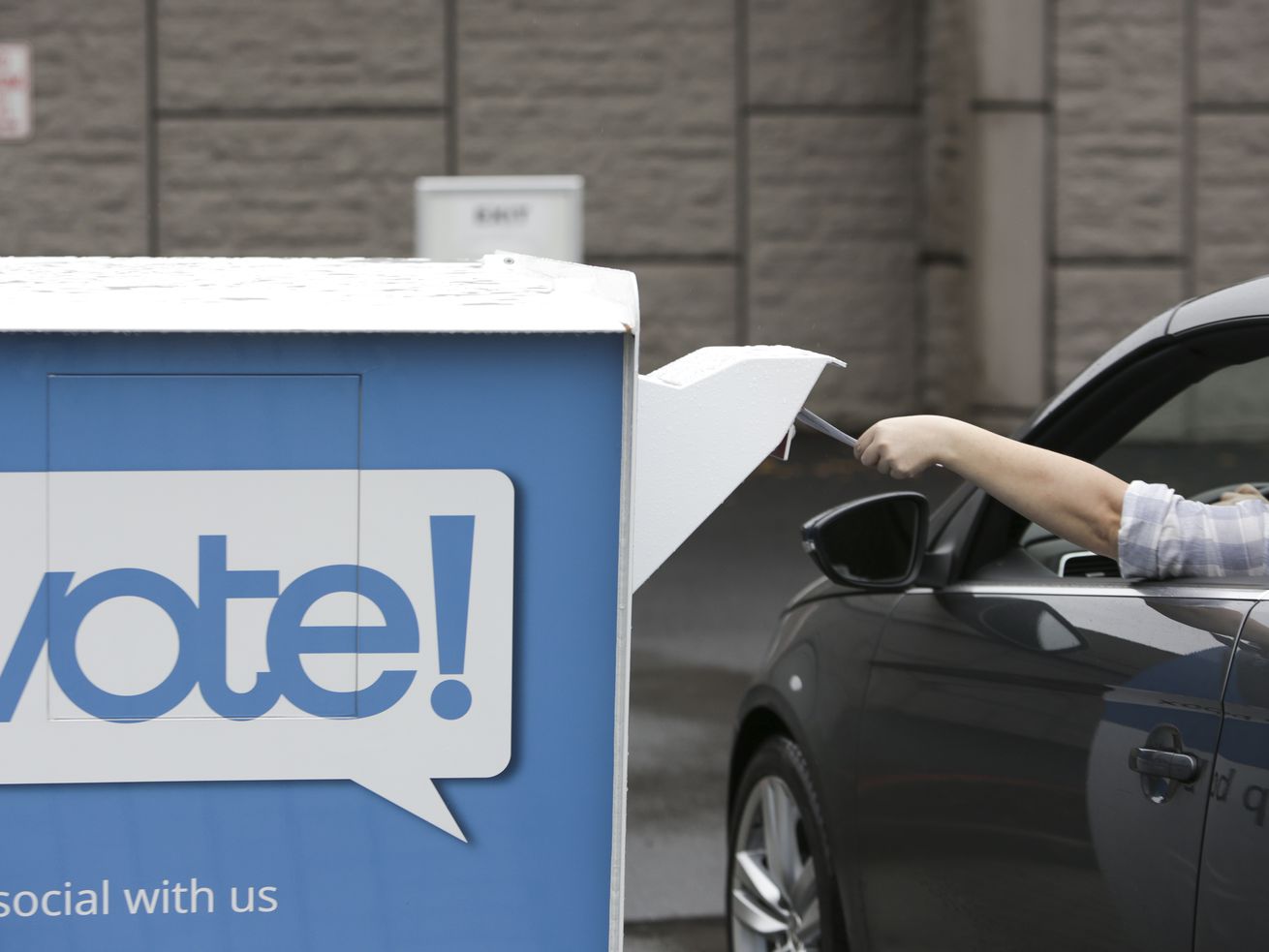 A voter drops off their mail-in ballot at the King County Department of Elections in Renton, Washington, on November 2, 2016. | Jason Redmond/AFP via Getty Images

The 11-candidate Republican primary in the state’s Second Congressional District is drawing attention — and thousands of dollars.

Oregon is going ahead with its usual vote-by-mail primary Tuesday, and though the presidential primary race is all but settled, three particular races for US House seats have drawn national attention — and spending.

Headlining the electoral slate is an 11-way race to replace retiring Republican Rep. Greg Walden in the state’s Second Congressional District, and a closer-than-expected primary challenge against Democratic Rep. Kurt Schrader in the Fifth.

All registered voters in the state received a mail-in ballot two to three weeks ahead of the primary, which they can then fill out and mail back in or drop off at one of the state’s ballot drop locations before 8 pm local time Tuesday.

As of Monday, just over 30 percent of registered voters had returned ballots, according to data released by the Secretary of State’s office, clocking in just under the turnout at the same point in the 2016 primary.

The US House primaries aren’t the only big races in the state worth keeping an eye on; sitting Portland Mayor Ted Wheeler faces off against 17 — yes, 17 — challengers Tuesday. The city will also vote on a set of new income and business taxes which are estimated to raise $2.5 billion over a decade to fight homelessness.

In addition to the race to replace Walden and Schrader’s primary battle, Vox is following the coastal Fourth District race, a seat currently held by Democratic Rep. Peter DeFazio, which has been deemed a top GOP target for 2020. Vox is covering the results live, in partnership with our friends at Decision Desk.

With an open seat thanks to Walden’s upcoming retirement from the House, the Republican primary in Oregon’s Second District, which covers a largely rural area in the southeast portion of the state, has become a free-for-all over who can establish themselves as a “true conservative.”

Several important local issues have emerged in the race, including what to do with the dams on the Klamath River and key forest management issues. One fringe candidate, Jeff Smith, said he would like to abolish the Endangered Species Act in order to free up forestry operations in the region, according to OregonLive.

Buehler has had to defend himself from charges that he’s not conservative enough after running a more moderate campaign for governor of the blue state two years ago. Back then, he encouraged President Donald Trump to withdraw his support for the nomination of Brett Kavanaugh to the US Supreme Court after allegations of sexual assault emerged. He also waffled on abortion rights.

Bentz resigned from the state Senate to run for Congress full-time. He was among a group of Republican state senators to walk out of the legislature last year to stall a climate change bill, eventually fleeing to neighboring Idaho to avoid Oregon State Police, according to the Oregonian.

Atkinson is the chairman of the Dove Christian Broadcast Network, which “exists to proclaim the Good News of Jesus Christ through all media platforms,” and unsuccessfully ran for governor in 2006.

Crumpacker, a commodity trader, told OregonLive that he thought his status as a political newcomer would appeal to voters in the Second District. “People in the Republican Party are frustrated with career politicians,” he said. “I’ve never run for public office, and I’m a staunch supporter of President Donald Trump.”

The race has drawn millions in outside spending, with anti-abortion groups like Oregon Right to Life and their PAC dropping a combined $207,000 and the anti-tax Club for Growth spending $213,000 attacking Buehler, according to a RollCall report. Oregon Right to Life has endorsed Crumpacker in the race.

Buehler is backed by a group funded in part by Nike co-founder Phil Knight called Republican Leadership for Oregon. The group has spent a total of $343,000 supporting Buehler and attacking other candidates in the race.

The race for the Fifth District seat feels familiar to followers of Democratic politics over the last four years. Milwaukie Mayor Mark Gamba, a progressive who supports Medicare-for-all, is challenging a more-established centrist House member, Rep. Kurt Schrader, in an energized primary.

The six-term incumbent holds a significant money advantage, raising more than $3 million compared to Gamba’s $223,000, but has also had to weather attacks on his fiscally centrist voting record. Schrader, for example, was one of just 14 Democrats to vote against the $3 trillion Democratic coronavirus relief on Friday.

Gamba has gotten endorsements from several local and national progressives, like state Sen. Shemia Fagan, former Portland City Commissioner Steve Novick, and former presidential candidate Marianne Williamson. But the mayor also has a checkered history of his own.

According to the Willamette Week, Gamba posted an anti-vax article on Facebook after a local measles outbreak in 2015. “You need to put some time into some honest research rather than swallowing the status quo and scare tactics that the Big Pharma dishes out,” Gamba said at the time, in response to criticism over the post.

Whoever wins the Democratic primary (and Schrader is the heavily favored candidate) is likely to go on to win the seat, as the district is rated “Solid Democratic” by RollCall.

In early February, the National Republican Congressional Committee released a list of 55 target races for retaking control of the House this fall. Among them was Oregon’s Fourth District, which lies along the southern coast of the state.

The seat has been held by Democrat Peter DeFazio since 1987 but has trended more conservative over recent years. In 2016, Trump lost the district by less than two-tenths of a percentage point.

The Republican primary in the district also features a celebrity candidate, Afghanistan veteran and former Dancing With the Stars performer Alek Skarlatos. In 2015, Skarlatos and two friends disarmed a terrorist on a Paris-bound train before going on to star in a movie about the incident. He lost a race for Douglas County commissioner in 2018.

Skarlatos is set to face off against Nelson Ijih, a former US intelligence officer who is running on a platform calling for mandatory term limits for federal legislators and more use of blockchain technology by the government.

According to RollCall, Skarlatos holds a significant fundraising advantage over his opponent, raising $490,000 with $109,000 on hand as of April 29. Robinson reportedly didn’t raise enough to warrant filing an FEC report.

DeFazio, a member of the progressive caucus, faces a challenger in the form of community organizer Doyle Canning, who has criticized the incumbent for taking it easy on Trump. She’s also said the 72-year-old representative may be too old for the position.

“This race is about the future ― of our district, of the country and of the Democratic Party,” Canning told HuffPost. “And we need leadership that is willing to take a stand against the corruption of the Trump administration.”