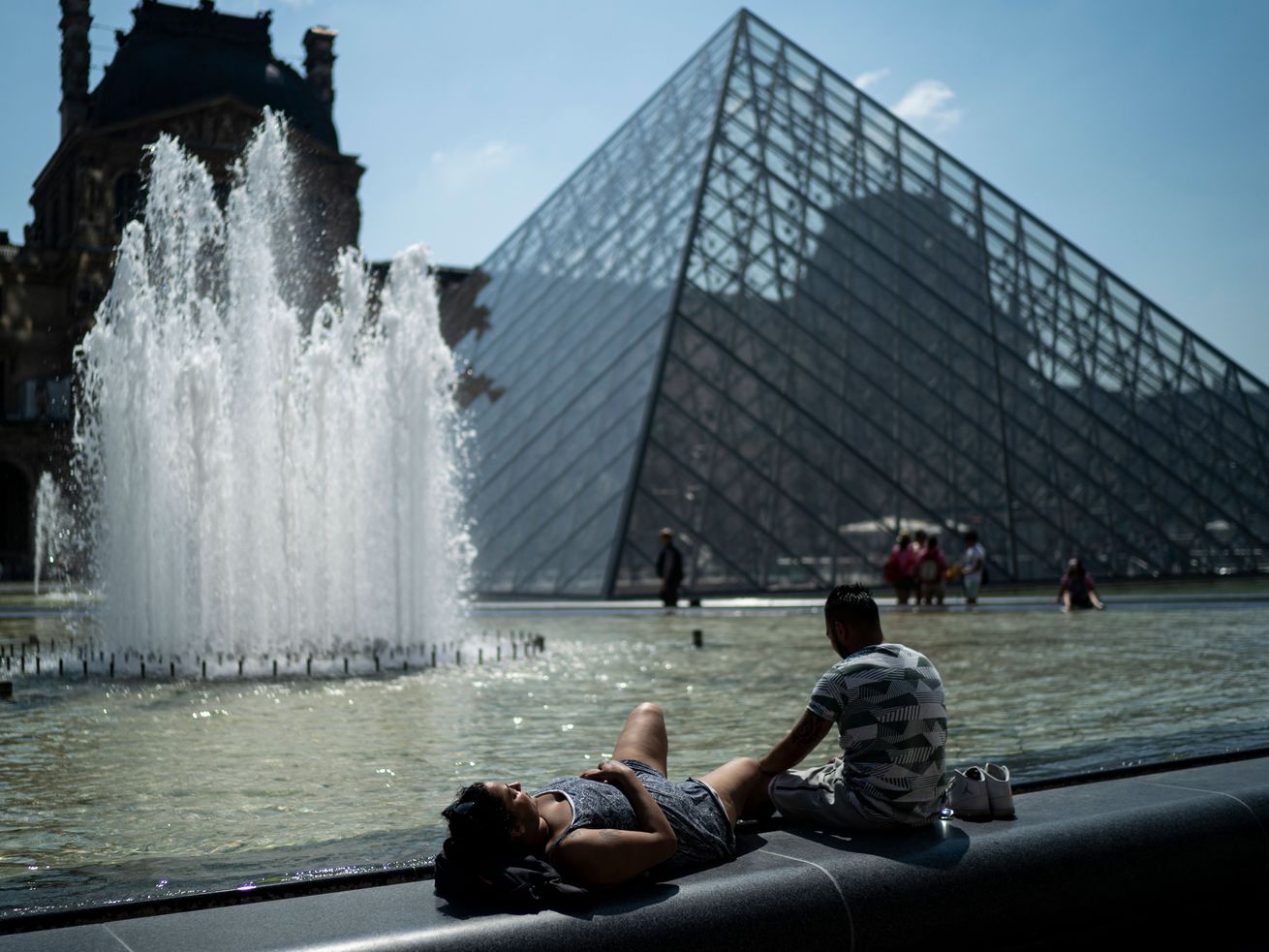 Public health officials are bracing for record heat this week.

Oppressively hot weather has descended on Europe this week, with temperatures reaching 104 degrees Fahrenheit in cities like Madrid and records poised to be broken throughout the continent.

The heat has forced the cancellation of some public events and caused schools in France to postpone exams for the first time ever. Public cooling rooms have been opened in Paris and other cities. The Women’s World Cup in France is still underway; matches are scheduled for evenings this week.

Europe’s hot weather this follows some unusually warm temperatures in other parts of the world this month, including the Arctic. Temperatures in Greenland surged up to 40 degrees Fahrenheit above what’s normal this time of year, leading to the largest ice melt this early in the season on record. A heat wave in India this month has already killed thousands.

The high temperatures in Europe also stand to harm millions of people. And as average temperatures rise due to climate change, these spans of extreme heat are poised to get longer, more intense, more frequent, and deadlier.

Europe has a deadly history with heat

This week’s sweltering weather is concerning because there are several key factors that make people in Europe vulnerable to extreme heat.

These factors converged to a devastating effect in the summer of 2003, when a heat wave baked the continent with temperatures 13 degrees above the average normal for the region. The heat killed at least 30,000 people caused 13 billion Euros in financial damages. Some estimates put the death toll as high as 70,000. At the time, it was the hottest summer for Europe since the 16th century.

It was a wake-up call for the continent and starkly illustrated the hazards of extreme heat and what could be in store if nothing is done as the climate changes. Public health officials have long known that heat is one of the deadliest weather phenomena. While there is some debate over whether extreme highs are more dangerous than extreme lows, there are a number of mechanisms that make heat concerning.

High temperatures make it harder for the human body to shed heat, which can lead to dangerous conditions like heat exhaustion and heat stroke, as well as organ failure. But the biggest impacts of heat are indirect. It makes breathing more difficult. It worsens air quality. It stresses the circulatory system.

So heat turns out to be most dangerous for people with underlying illnesses and without access to adequate cooling. During the 2003 heat wave in Europe, the elderly comprised the largest share of the casualties, many with preexisting health conditions.

Europe is also not a region known for especially high temperatures, so many parts of the continent lack the resources to cope. Many buildings don’t have air conditioning and aren’t designed with passive cooling in mind. In Germany, as few as 2 percent of homes are air conditioned.

But it’s not necessarily how high temperatures rise that makes them so dangerous; it’s how different they are from what’s normal. That’s why heat waves can kill people in cool climates. People in sunny southern Spain can more readily cope with triple-digit temperatures but 90-degree days in cooler northern Germany can send people to the hospital.

Another factor to consider is that much of Europe is densely urbanized, with 72 percent of the European Union’s population living in cities, towns, and suburbs. Steel, concrete, and asphalt readily absorb heat and cause cities to warm up hotter than their rural surroundings, creating heat islands. As the populations of these cities grow, so does the number of people facing risks from extreme heat. And increasingly, it’s not just the sick and elderly who are vulnerable, but outdoor workers like farmers, landscapers, and construction crews.

The length, intensity, and frequency of heat waves are on the rise, and Europe’s searing weather this week comports with what scientists expect as the climate changes, though it will take some time to tease out the specific extent of humanity’s role in the current wave.

The number of #heatwaves in #France has doubled in the past 34 years and is expected to double again by 2050, per @meteofrance #ClimateChange pic.twitter.com/uUHT1HgnLT

But researchers have built up a better understanding of last year’s heat wave across Europe in the context of climate change. Scientists reported last year that climate change has made heat waves similar to the 2018 heat wave in Europe five times more likely. Researchers also reported that 2018 was one of the hottest years ever.

The concern now is that Europe today may not be prepared for the world to come. Infrastructure like roads, bridges, and rail tracks will now have to compensate for regularly high temperatures. Parts of Germany have already issued speed restrictions for the autobahn.

Similarly, extreme heat helped drive major wildfires as far north as the Arctic circle last year. Wildfires have again surged in Europe this year, so parts of Europe are dealing with weighty questions of whether they should rebuild in fire-prone regions or start to retreat as the risk of massive blazes next to densely populated areas grows.